Upcoming remakes to the first Nintendo DS Pokémon games, Brilliant Diamond and Shining Pearl from ILCA are two of the biggest releases set for Nintendo’s holiday lineup. A preview event was held just over a month ahead of their anticipated release, November 19. We got a glimpse at what’s staying the same in these updated games and which modern conveniences are added to the Sinnoh adventure.

We began our demonstration with a glimpse at the world. It remains true to the original vision of Diamond and Pearl. It is visible overhead and Sinnoh characters are represented in chibi-models. Everything has been rebuilt with 3D models with updated textures, as we knew from the trailer a few months back. What is new about wandering the routes from town to town is the option to let one of your Pokémon companions stroll behind you at all times. It’s a cool feature from Let’s Go Pikachu and Eevee and the Sword and Shield Isle of Armor DLC that I’m very happy to see return. 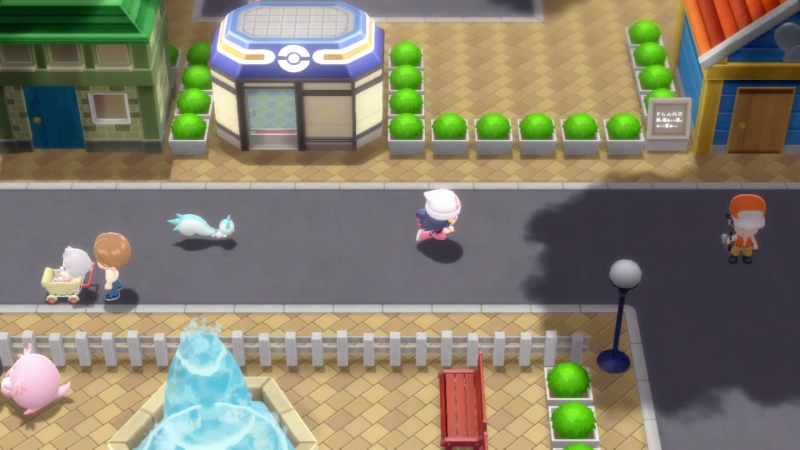 If you want more Pokémon from your party out and about, head to Amity Square. It’s a location that allows predetermined “cute” Pokémon to spread out around the park, causing a sort of hide-and-seek game to play out. Your monsters will find items around the area, and as you find each one, they’ll begin to follow you wherever you roam in Amity Square. The developers have added a zoom function for the camera in-game so that you can take pictures with more than one person from your group. You can bring all the favorites that you like (that have been deemed cute by an Amity Square attendant), and create some memorable memories.

Speaking of cute, the Pokémon Super Contest Shows return as well. The Super Contests allow you to enter in various categories such as Cuteness and Toughness. You’ll play a simple rhythm game during the competitions and try to unleash a pre-chosen move from your Pokémon at the perfect time to wow the judges. You’ll also be able to see the fruits of your Ball Capsule customization. With Ball Capsules, you can add stickers to specific Pokéballs, creating unique animations and flourishes whenever you bring that Pokémon out. I saw a combination of flames and water effects applied to one of the Pokémon our demoist brought out. Shining Pearl and Brilliant Diamond will each have more than 90 stickers. Some of them can also be won by attending the Super Contest Shows. 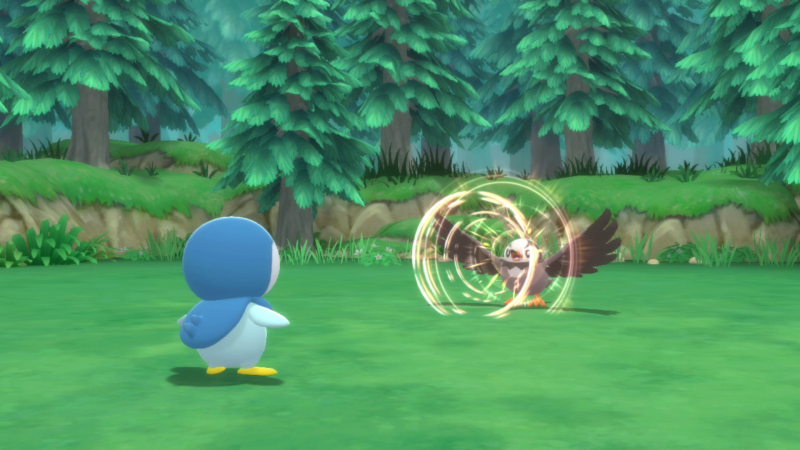 Brilliant Diamond and Shining Pearl aren’t going to be completely faithful to the originals, as the remakes are bringing in some well-tested features from the most recent mainline games. First, Pokémon battles use the full 3D models you’d expect to see in Sword and Shield. Your trainer is also given a full-sized model so that you can show off your character’s outfits in battle. EXP Share is applied to all Pokémon in your party when a battle concludes. However, it was confirmed that it’s not a feature that can be turned off this time around. You’ll also see your attack effectiveness and autosaves returning as quality-of-life additions.

A big question going into these remakes was whether Hidden Machines made the cut since they’re in a very different state in the modern Pokémon games. This time around, winning Gym badges will unlock HM moves that can be used in the world, but you do not have to teach them to your Pokémon. Using an HM like Strength to move a boulder will make a wild Pokémon appear and use the move for you. It doesn’t really make sense, but I’ll take the convenience over wasting precious move slots. You can call on these helpful wild monsters using the new and improved Pokétch, the watch-like device from Diamond and Pearl, which is now more like a modern smartwatch. Apps on this new Pokétch include a step counter, Pokémon friend checker, a calculator, an item dowsing machine, and a drawing pad.

I loved the Grand Underground part of this demo. This massive underground map is comparable in size to Sinnoh. Trainers have the ability to excavate items below ground from the walls of caverns. Here is where you can sometimes find Pokémon statues, decorations that can be set in your Secret Base. These Secret Bases are special customizable rooms found in the Grand Underground. Depending on which Pokémon figures you decorate with will affect which Pokémon you can find and catch in larger Underground rooms called Hideaways. Use certain bug Pokémon statues? You’re more likely to find more bugs in the local Hideaway. The device located at the top of your Secret Base can let you know what will happen to the Hideaways. Statue collection will be a big part of the Grand Underground experience and your overall Pokémon collection strategy. You can even find rare Shiny statues that have a completely different effect than their regular counterparts.

My demo with Pokémon Brilliant Diamond and Shining Pearl was short, but as you can see, very informative of the overall package. From what I’ve seen, I’m very excited for these remakes and to get back to Sinnoh and check out all of these changes for myself.