God is dead and it’s humans who killed him. Alder’s Blood, a grim, tactical strategy RPG that amassed a devout following on PC, is available now as the Alder’s Blood: Definitive Edition for Xbox One and Xbox Series X|S.

Whenever the Fall season approaches I look for games that I can play on those cold, rainy autumn evenings. The kinds of games that exude atmosphere and let you disappear into their world. One such game is definitely Alder’s Blood. The stylish art style and wonderfully eerie soundtrack will lure in any grim setting aficionado and the turn-based tactical combat, that requires you to think, stealth around, and plan around the encounters will make them stay.

In Alder’s Blood, you take on a role of a chief of Hunters, half-beast, half-human protectors of mankind, who spend their lives battling away hordes of evil monsters who threaten humanity. The actual battling happens on encounter maps where your objective is either to kill the monsters there, reach a specific spot, or retrieve an object of interest. As you can tell it’s not all combat all the time, and sometimes it may even be better to avoid a fight if you’re outmatched.

But monsters are not the only threat to your hunters — starvation is another. When you traverse the world map you have to make sure you scavenge for enough food to keep your squad going. When camping on the road you can also rearrange your hunters’ equipment to better prepare them for the fights to come. Alder’s Blood lacks a lot of the randomness that similar titles like XCOM are built around but that doesn’t mean the game won’t challenge you or make you yell at your console when something goes wrong. That part, of course, I count as a plus in the genre. A game like that has to keep you invested.

As of writing this, I’m already most of the way through the game, and it keeps me wanting to play it after work every day. I keep coming back to see more of the story. To see what kind of mission I’ll get to beat next. What kind of loot I will acquire. Appropriately for an RPG, it keeps you addicted to the gameplay loop and makes you speculate about where the plot’s gonna go even hours after playing it. Whether you’re in it for the lore or the loot, this game is sure to satisfy your cravings. See you on the hunt! 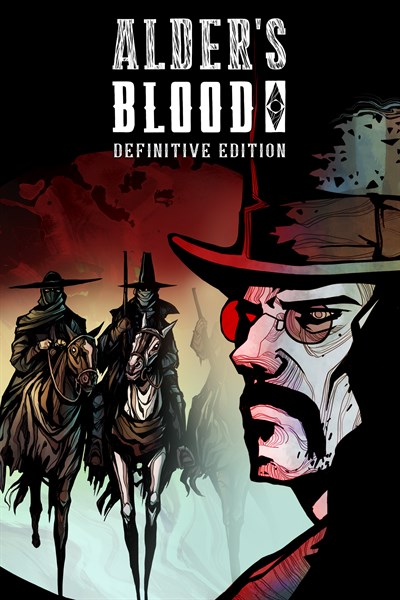 God is dead and it was us who killed him.
Without God, the world became twisted and has fallen into chaos. Malevolent essence bleeding from his dead carcass gives birth to inhuman abominations that roam the land, hunting and devouring anything human.

But God’s death has also sprouted a new kind of life: The Hunters.
They look human, but they are not. They are so much less, and so much more. The meaning of their life is to vanquish the ever-growing Darkness and to protect humanity – at all cost.

Each clan of Hunters has their own Chief, and that’s the role you’re going to play. As the Chief, you manage your clan’s camping, shifts, equipment, resources, crafting, trading, travels, and most importantly – the Hunt.

Hunts are the main source of field experience for Hunters under your lead and the rewards you reap from them are the main way to fund your future hunts. But beware, they’re extremely difficult and dangerous, as the spawns of Darkness take various shapes – each more deadly than the other.

On the Hunt, there is no place for blind bravery or brute force – those will only lead to your end. stead, the key tactics are stealth, paying attention from where the wind blows, traps, ambushes, and swift, accurate strikes. There is no room for mistakes and each – is being paid with life and blood.

Only carefully threading your actions, strategies and wise management of your scarce resources – does give you a chance of survival.

Then, it happened.
An old friend, but with a stranger’s face.
They saw things they were not supposed to see with their blind eyes.
Silence replaced by whispers
Screams replace whispers.

The curtain is drawn on this world in pain
…is about to fall.